When the broadcast industry talks about using IP for remote production, it usually focuses on the coverage of high-end, high-profile sporting events, and how the technology can help reduce costs. However, IP remote production also has an important role to play at the opposite end of the scale: making it economically viable to cover sports that have a small potential audience, thereby creating new revenues streams for broadcasters.

The opportunity to cover minority sports profitably by optimizing production workflows is perfectly illustrated by a project undertaken by Nevion recently with HDR Denmark at the end of 2017.

Founded over 20 years ago, HDR Denmark A/S is a full-service facility with a long list of services in broadcast, advertising and film, including TV studios, outside broadcast rental, post-production, system integration operations and support.

HDR works with production houses and broadcasters in the Nordic countries, in addition to business clients who want an innovative and future-proof media solution.

HDR is behind high-profile productions such as Big Brother, One Born Every Minute and Ex On The Beach.

In mid-2017, HDR was approached by its production partner STV A/S to provide the infrastructure needed to cover live horse racing in Denmark for a new channel called Fast Track, which was due to be launched in January 2018.

This launch was to coincide with the ending of the state monopoly on offering online bingo and horse race betting in Denmark.

The coverage was to involve around 260 race-days, taking place at 9 different race-tracks across Denmark – occasionally 2 race-tracks on the same day.

With horse racing having a comparatively small audience in Denmark, the production could not be of the same magnitude as some of the larger shows and events HDR would normally handle, otherwise it would not be viable. Costs needed to be reduced to below estimated revenues.

HDR recognized that IP remote production was the only option to achieve the level of nimbleness and cost-effectiveness they needed.

The objective was to have the minimum amount of people involved in the production. On-site, at the race-track, there would be just one cameraman, one commentator and one reporter. In the central production facilities, there would be just one operator producing the show, with one host and one guest in the studio. The production would take place over IP links between the race-track(s) and the central facilities. 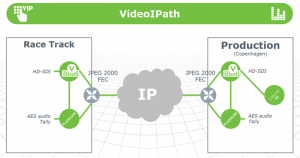 The products it selected were: 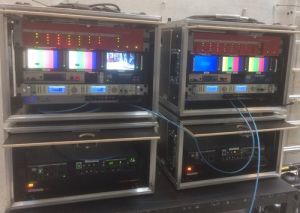 The remote production unit (RPU) equipment is transported to the race-track in a car, and set up by the cameraman onsite. There are 2 RPUs for days where races take place at 2 different tracks.

Each RPU has 2 cases, designed to be easily transported by the cameraman. Every connector and cable is color-coded to make it easy to set-up the unit.

The project had an extremely tight deadline. The equipment was ordered from Nevion in November 2017, and the Fast Track channel went live in early January 2018!

This project demonstrates clearly that, by opting for IP remote production, optimizing the workflows and picking the right equipment, it becomes profitable to cover “minority” sports events for the benefit of viewers and broadcasters.