When Iceland’s Sýn (Vodafone Iceland) needed to move premises, it turned to Nevion and local partner Exton to create a modern IP media network that would work with its existing SDI equipment.

Sýn is an Icelandic company formed in 2017 by the merger of Vodafone Iceland and 365 broadcast media.

Sýn wanted to consolidate its telecom and broadcast premises for cost-efficiency and work-effectiveness reasons. This required its broadcast production to move.

Rather than transfer the existing SDI production network infrastructure, Sýn opted for a new IP media network, that would provide greater flexibility, future-proofing, scalability and cost-effectiveness over time. The production equipment, including cameras, video and audio mixers, would remain unchanged, i.e SDI-based.

The new facilities also needed to connect to two other locations: the satellite reception site, as well as in the DVB and IPTV headend site.

“We could have taken the safe route and built an SDI infrastructure, but we knew that was not a good investment in the long term”

The project had a couple of major constraints. Firstly, the cost of the new IP network needed to be comparable to that of an SDI network. Secondly, the solution needed to be operational within 6 months, as the current premises had to be vacated by then. These constraints meant that Sýn was looking to keep risks to an absolute minimum in the project.

Sýn turned to Nevion and its local Icelandic partner Exton to deliver this project. Exton has a long-standing relationship with Sýn and is a trusted supplier. Nevion was able to demonstrate a track record of being able to deliver such successful “IP in the facilities” projects, fast and on schedule, e.g. TV 2 (Norway) and PLAZAMEDIA (Germany).

Fairly early in the project, the decision was made to create a “software defined hybrid network”, with IP at the core, and some small SDI “sub-networks” connecting islands of SDI equipment. The whole network would be controlled seamlessly by software.

By creating a system that allows baseband and IP signals to live side by side in the same network, costs could be optimized.

At the core of the solution delivered in the new facilities is an IP network built around Nevion’s COTS (commercial off the shelf) eMerge IP switches.

Nevion’s software defined media nodes, Virtuosos, provide the gateways between the SDI equipment and the IP media network, as well as video and audio processing, and 4K TICO encoding. 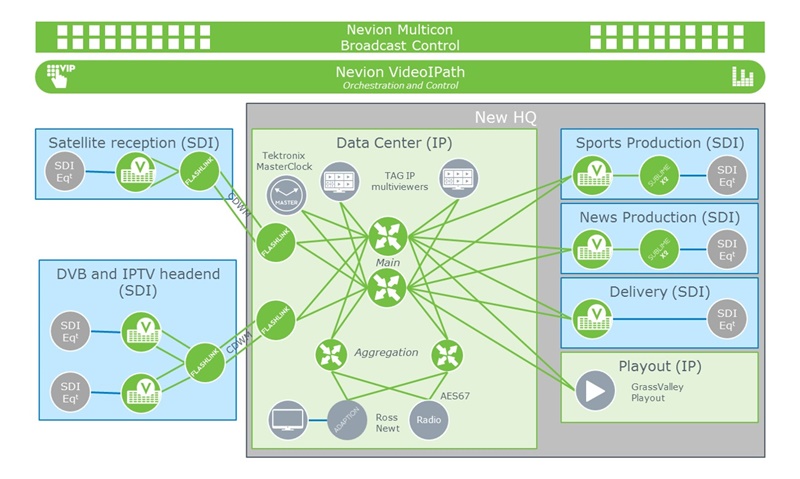 For the sports and media production, in which many pieces of SDI equipment are used, Nevion’s compact hybrid SDI routers, Sublime X2, are used to enable easy routing between the equipment, without the need to convert to and from IP.

Sýn also has some equipment remaining in other locations – the satellite reception site, as well as in the DVB and IPTV headend site. These two sites are connected via fiber, with Nevion Flashlink equipment enabling the transport of the IP packets.

Nevion’s VideoIPath handles the orchestration and control of the whole network, enabling signals to flow seamlessly between the IP and SDI parts. The broadcast control, i.e. the user-interface for the production team, is Nevion’s Multicon.

A mixture of composite (audio embedded with video) and essence-based workflows are used in the new network. The solution itself is ready for full essence-based transport (SMPTE ST 2110) but using composite workflows (SMPTE ST 2022-6) was considered more efficient as the production equipment was almost entirely SDI-based. Another reason for selecting SMPTE ST 2022-6 was to reduce the risks associated with PTP. Even though PTP was implemented in the network, it was uncertain at the time of launch what other edge equipment would be chosen by Sýn and how that equipment would handle PTP. For that reason, it was safer to build a system that could also operate without PTP.

Most audio flows are de-embedded from the video and made available in the network in SMPTE ST 2110-30 format.

The new media network was ready in just 6 weeks, and was first used for live production in February 2019.

“IP media networks have now reached a level of maturity that allows them to be delivered as quickly as SDI networks. In fact, given the cabling is so much simpler, with a few lightweight fibers being used instead of the multitude of bulky SDI cables, IP media networks can even be delivered faster in greenfield sites like Sýn’s facilities.”

Syn now has a modern and cost-effective infrastructure that enables a much more agile in production, can growth with its needs, including of course accommodating existing and future formats  (e.g. 4K and more) and standards  (SMPTE ST 2110, NMOS).