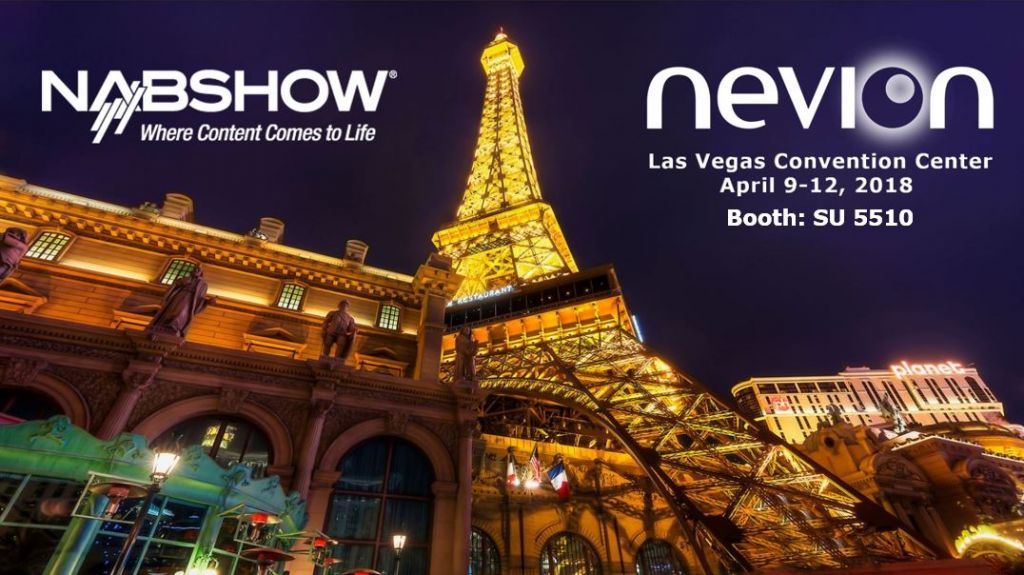 Oslo, Norway, 3 April 2018 – Nevion, the award-winning provider of virtualized media production solutions, is dedicating its NAB stand (south upper SU5510) to the message: ‘the IP revolution: seize it, lead it, live it’. With the help of real-life case studies, it will focus on standards and formats, IP LAN/WAN convergence and virtualization. It will also show how broadcasters, production houses and service providers can leverage IP and virtualization technology to become more agile and efficient.

Center stage will be the latest versions of Nevion’s flagship products which will feature in all demos: Virtuoso, the software-defined media node, and VideoIPath, the orchestration and SDN control software. Both products are designed for an environment in which the distinction between LAN used in the facilities and WAN used in contribution, remote production and distribution is becoming blurred. They are key to delivering infrastructure and media function virtualization.

The latest software update of Virtuoso provides a host of features. These include support for UHD/4K TICO encoding in addition to JPEG 2000, enhanced audio support (including audio shuffling, delay, gain and video embedding/de-embedding) and advanced hand-over between contribution and facilities to SDI, SMPTE ST 2022-6 and SMPTE ST 2110.

The latest release of VideoIPath includes, amongst others, the convergent support for data and media on the same networks, and updates to its Flow app that offers a radical improvement to workflow planning and execution.

The demos will feature a live, all IP, leaf-spine network, with Mellanox SN2010 switches at the core, under the control of VideoIPath. Other switch vendors which Nevion has worked with will also be highlighted on the booth, including Arista, Cisco, Juniper, and Huawei.

Geir Bryn-Jensen, CEO, Nevion, says: “We all know that IP is radically transforming the way content is produced and transported. The technology being used now to dramatically streamline workflows and impact the economics of production for the better, but there is still a long way to go in terms of widespread IP adoption across both LAN and WAN environments. The broadcast industry must seize the opportunity that’s in front of them, ensuring it maximizes the potential and fully embraces the technology in order to become nimbler and more cost-effective.”

Nevion’s solutions will also feature prominently on the IP Showcase booth, with demonstrations of SMPTE 2110 interoperability with other vendors. Elsewhere, VideoIPath and Virtuoso will be used for demos by Arista (SL12105) and AWS Elemental (SU2202). The TICO Alliance (C8525) will also be showing Virtuoso running the TICO encoding/decoding.

Nevion has been announced as a finalist for the IABM BaM Awards 2018 in the project, collaboration, event or alternative product/service category for its work with TV 2, the largest commercial television broadcaster in Norway. Nevion provided an IP-based software defined network (SDN) solution that connected the studios, control rooms and data centers within and between the broadcaster’s two main production facilities.

For more information about Nevion and its products/services, please visit the NAB 2018 webpage.