This week, Nevion announced that Norway’s TV 2 has chosen Nevion for intra- and inter-facility IP media transport. This is a very exciting project in many ways, not least because it’s a bold step towards Infrastructure Virtualization.

Equipment sharing is obviously a concept that exists already to some extent in the baseband world. For example, it is possible to route workflows through a piece of signal processing equipment that is shared.

However, Infrastructure Virtualization takes this a step further, by detaching the physical equipment from the production workflow and greatly automating the process. The advent of IP makes this much easier.

Virtualization is achieved by using a software management layer (or virtualization orchestrator) such as Nevion’s VideoIPath, to elevate workflows to a level that does not require users to have any understanding of the underlying connectivity of the network and equipment. The orchestrator is intelligent enough to change the network based on information provided by the network itself, so effectively the network topology is software defined. 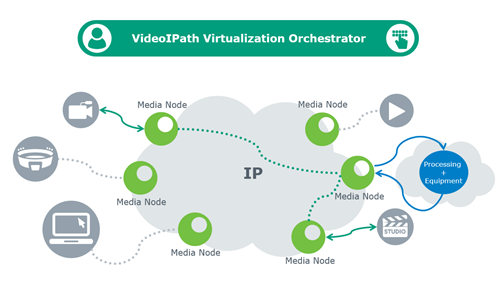 The journey towards Infrastructure Virtualization is an incremental one. First, it is about being able to connect endpoints together, e.g. between locations or between pieces of equipment, without having to worry about the details of how that is done – virtualizing routing. The second step is being able to add a function to the workflow (e.g. audio embedding), without knowing the location of the equipment or the endpoint connectivity – virtualizing processing capabilities. The final step, full infrastructure virtualization, means a fully automated registration and discovery of equipment and capabilities (something that will be possible once AMWA’s NMOS is completed and adopted widely).

The TV 2 project allows resources (including control rooms and their equipment) to be shared between studios (and between two locations). In fact, some of the processing capabilities, such as encoding for contribution, are pooled in a datacenter for use by any production.  VideoIPath is used to ensure that the signals are routed appropriately between control rooms, studios and data centers, across the locations.

Infrastructure Virtualization makes it easier to share equipment and applications between locations – in real time. That way, equipment usage goes up, investment needs go down, and the best tools are available for production anywhere, anytime.

Of course, Infrastructure Virtualization is just one step towards Nevion’s vision of The Cloud of Real-Time – but that’s for another blog!

As an industry, we tend to obsess about technology, products,…

When it comes to IP LANs, a lot of the…

This week, Nevion announced that Norway’s TV 2 has chosen…