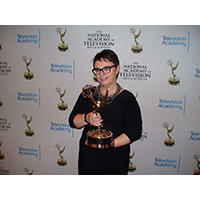 Nevion honored alongside companies such as Apple, HBO, Twitter and Netflix.

Nevion, a leader in transporting media from the camera to the home, has received a Technical and Engineering Emmy® award from National Academy of Television Arts & Sciences (NATAS), at a glamorous ceremony during the Consumer Electronics (CES) Show 2015 in Las Vegas, Nevada, USA. The award is in recognition of Nevion’s role in the standardization and productization of JPEG 2000 (J2K) Interoperability, which is a high quality image compression technology that is used by broadcasters for the transport of professional video over IP networks.

Back in Norway, clutching the award, Nevion Chief Product and Development Officer Janne T. Morstøl said: “I am incredibly proud to have had the privilege to receive this Technical and Engineering Emmy Award on behalf of the Nevion engineering team. It was so exciting being honored at a ceremony that was also recognizing the likes of Apple, HBO, Microsoft, Twitter, Netflix, Roku, Sony, Tivo and many other leading lights in the industry.”

The Nevion team is one of the pioneers of JPEG 2000 over IP for live contribution and first launched this technology at the NAB show in Las Vegas in 2006.  Since then, Nevion has played a key role in the development of the standard, working with the Video Services Forum (VSF) to develop the JPEG 2000 technical recommendation. The Nevion JPEG 2000 solutions have been deployed by leading network services providers and content producers such as BBC, BT, EBU, ORF, NRK and Telenor. The technology is also widely deployed in the Hollywood post production for remote screening and remote color correction.