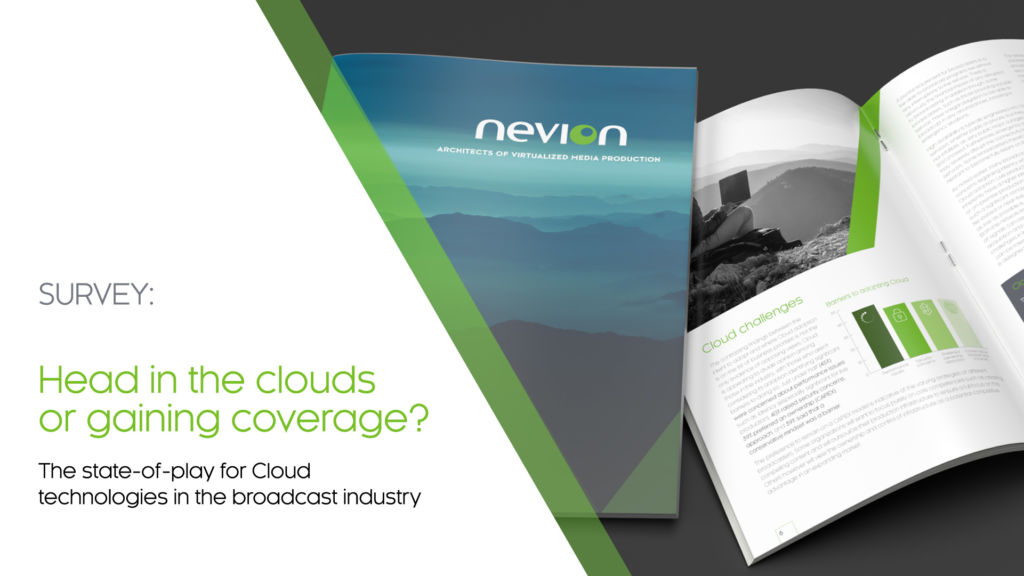 Oslo, Norway, 16 August 2022 – A new survey of broadcasters across the world, undertaken on behalf of Nevion, a Sony Group Company and award-winning provider of virtualized media production solutions, has found that less than a third (27%) see cloud adoption as a priority, falling behind 5G technology (34%) for example. This is at odds with the almost 9 in 10 broadcasters (89%) intending to adopt Cloud technologies in the next year.

The survey, which polled 250 senior technology decision makers within the broadcast industry across 10 regions, did however highlight a growing appetite for the use of Cloud for specific applications, with nearly two thirds (63%) stating that they have already started applying it to post-production/file-based production.

However, concerns remain around the suitability of using Cloud for live production, with just under half (45%) having reservations about performance issues such as latency, with a further 40% citing security concerns. For some organizations, the need for a broader shift in thinking is perceived as a challenge, with 39% stating that a broadly conservative mindset to Cloud within their company was the biggest barrier to adoption.

Despite this, the benefits of Cloud are still being recognized, and the future of Cloud for live product looks promising, with further statistics from the research discovering that over two-thirds (71%) of respondents believe that all-public Cloud environments for live production will be possible in the future.

“Our research confirms that Cloud technology is generating a lot of interest in the broadcast industry. At the same time, however, it also shows that there are different levels of commitment being made by broadcasters and media companies to adopt the technology in the short and even medium term, especially in the case of live production,” said Olivier Suard, VP of Marketing at Nevion.

“While some organizations are considering an all-Cloud approach, others are still choosing to stay with more traditional on-premise production, or are looking to move to a hybrid Cloud and ground solution. Regardless of the approach, Sony and Nevion are working together to ensure that broadcasters have the right mix for their business, creative and operational needs,” Suard concludes.

The survey can be downloaded here.