On January 31st, Nevion hosted a SMPTE event on the Adastral Park campus at Martlesham Heath, Ipswich, which is one of the company’s UK base. The event theme was “next generation video and how this is handled in an IP world”.

Nevion has been an active member of SMPTE for many years, helping shape many of the standards that form the backbone of professional media transport, particularly over IP. In recent months, Nevion has also been engaged in helping to define the emerging standards for transport in the facilities. So it was fitting that Nevion should share its experience with the rest of the industry.

Even though Ipswich is not the easiest place to reach from other parts of the UK, the turn out for the event was excellent – over 70 people from the broadcast industry across the UK attended the event, some even travelling 5 hours to get there! Broadcasters, service providers, manufacturers and others were all in attendance.

“The size of the audience and their questions and the way in which they stayed for the demos despite being a long drive home shows that this was a very important event.”

The first speaker was Andrew Lord, Head of Optical Research at BT, who provided an update on the state of research into optical networks, highlighting in particular the world first demonstration of 5.6Tb/s optical super-channel transport over 359km/225miles field trial link that BT carried out in 2016.

Next was Nevion’s Vice President of Engineering, Andy Rayner. His presentation looked at the state of play in terms of standards, as essence based transport comes to IP (SMPTE 2110). He highlighted some of the major consequences of IP and IT making big in roads into live production, in particular the convergence of LAN and WAN (facilities and long distance transport) and the need for a consistent approach especially around management and software defined networking (SDN) – and of course of standards.

After the presentations were over, there was plenty of mingling, with many fruitful discussions. 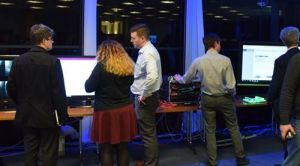 The feedback has been overwhelmingly positive , which was obviously very rewarding for all those involved in the organization of the event.

Andy Rayner gives a progress update for the ST 2110…

Nevion has had a long standing commitment to industry standards,…